June 18, 2012
When I broke ground on the first house I built, in 1988, I spray-painted a shovel bright gold, chilled a case of champagne, gathered a bunch of friends, and made it a party.  Many years, and a few new houses have since come to pass, and I thought I might not need to commemorate the start of a new building.  Then the Amity Fire District agreed to use our “old house” as a “Burn to Learn” training exercise, and a reason to party was reignited, quite literally.  It was a fabulous bonfire, including a gathering of friends, neighbors, dozens of volunteer firemen (and women), lots of big shiny firetrucks, and a hot chili lunch on a cold rainy day.  I’m grateful to the firefighters, not only for giving their personal time to protect our community, but also for turning 20 dumpsters of trash into 1 dumpster of ash.  Of course, there is a cost to the environment of burning a house, but we weighed in favor of not adding a whole house to a landfill and also saved money on the dumpsters. 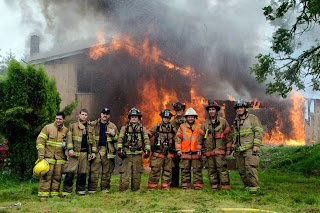 We played by the rules and tested the old house for asbestos.  The results required that we contract for professional removal and disposal of the kitchen and bathroom sheet flooring.  We would’ve incurred this expense ($500 for the testing and $1,000 for removal and disposal) regardless of whether we burned or trucked-out the old house, as a landfill, too, would require documentation.

We are not planning to place the new house on exactly the same site as the old house, so we’ve contracted for removal and recycling of the concrete to a local quarry.  We also removed most of the useable and recycle-able materials from the house before the fire.  We scrapped all of the metal, including siding and appliances, and we found Craigslist and Habitat for Humanity to be very helpful ways to re-home what we could not re-use.

Our building project just moved from the years-long “planning phase” to the “doing phase.”  The paperwork is done, our building permit application is being reviewed by Polk County, and it’s time to make a hole.  You don’t need a permit to dig a hole, and by moving forward with the clean-up of the old site and excavation of the new site, we will be ready to start a foundation and walls as soon as we have the permit in hand.

When we contracted with an excavation company to dig up the power line from the old house last month (and used an electrical contractor and PGE to move the power to a temporary pole) we piggy-backed some preliminary site-work into the day.  While we had the excavation equipment on site, test holes were prepared for the septic field, allowing for an immediate soil and site inspection for approval of our septic permit.  We also removed a few trees and laid-out the driveway and work site.  A house may only sit on a 30 x 60 footprint, but 3 – 4 times that much space is needed to comfortably get around it and build it.

Site work is expected to take 5 days, followed by a day to construct forms for footings, a county inspection of the concrete forms, and then the first of a long line of concrete trucks will parade up our steep driveway.

Nathan Good Vineyard Home: Structure From the Ground Up
The Wizardry of Walls